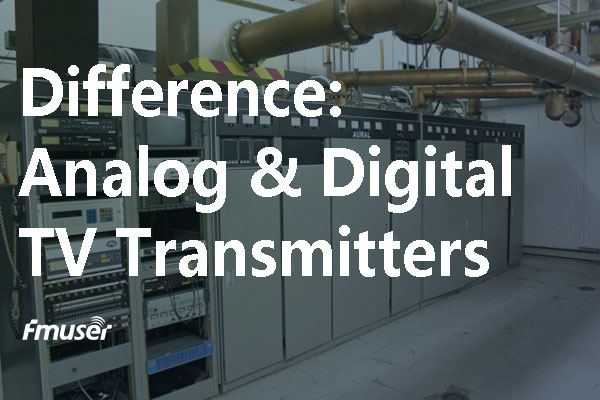 A TV transmitter is an electronic device that radiates radio waves, which carries the video signal representing a dynamic image and the audio signal synchronized with it. It will be received by a television receiver and displays the image on the screen and emit a corresponding sound. Its working frequency is limited to VHF and UHF frequency bands, and its working power ranges from 5W to 10kW. It is often used in the field of television broadcasting like tv stations.

The two transmission ways result in different aspects of analog TV transmitter and digital TV transmitter. These differences will be described in detail in the following.

The Capacity of TV channels

Analog signals need to occupy a wide frequency band. In the beginning, FCC divides every 6MHz into one channel among the allowed frequency band, and one channel accommodates one TV channel. Therefore, the analog TV transmitter broadcasts a limited amount of TV channels.

The digital TV transmitter can transmit more interesting TV programs to the audience. It is the digital technology that announces TV broadcasting enters the HDTV era.

Due to the different working modes of digital TV transmitter and analog TV transmitter, it has brought various impacts to operators and viewers, including cost, signal transmission quality, viewing experience, program content design, and so on.

How to Choose the Best TV Transmitter?

The TV transmitter you choose should be able to work in the above three frequency bands.

It refers to the frequency range of radio signals transmitted by the TV transmitter, that is, the bandwidth it uses. The wider the bandwidth, the more TV channels can be carried.

The above is the international plan of broadcasting standards formulated by ITU, which pointed out that the most important numbers of the TV transmitter are the Frequency separation between auditory and visual carriers, Radio Frequency, and Bandwidth. If you need to update or buy TV transmitters, please look for a reliable radio broadcasting equipment supplier like FMUSER, who can provide you with high-quality, low-cost digital&analog TV transmitters and related equipment, such as TV antennas and so on. If you are interested, click here to learn more.

1. Q: How Far Can a TV Transmitter Broadcast?

A TV transmitter can transmit on frequency channels in the VHF, and UHF bands. Since radio waves of these frequencies travel by line of sight, they can travel a distance of 40–60 miles depending on the height of the transmitter station.

2. Q: What Can Interfere with the TV Signals?

A: The obstacles around the TV transmitter would interfere with the TV signals quality.

In general, obstructions are those between your local broadcast towers and your Over-the-Air TV antenna that can interfere with the TV signals, including trees, mountains & valleys, large buildings, and so on.

3. Q: How are TV Signals Transmitted?

A: They are transmitted in the form of radio waves to the air.

The TV signal is carried by cable to an antenna, which is often on a high mountain or building. The signals are broadcast through the air as radio waves. They can travel through the air at the speed of light.

4. Q: What is the Frequency Band of a TV Transmitter?

A: It can broadcast on the VHF and UHF bands.

A TV transmitter can transmit in VHF and UHF bands. The following are the frequency band in detail: