What People Are Concerning:

In recent years, due to the popularity and development of IPTV video, video types have begun to diversify, with various formats, protocols, resolutions, device interfaces, etc., and our original devices always seem to be unable to keep up with the latest technology.

Replacing the original equipment is time-consuming and labor-intensive and costly. In order to solve this kind of problem, FMUSER is now launching a new FBE300 transcoder to solve all your troubles with IPTV video.

the FBE300 can encode video files into IP video streams and push them to the network for use in public digital signage.

the FBE300 can decode IP video streams into HD video for display and online video playback also can be a set-top box for use with a TV. 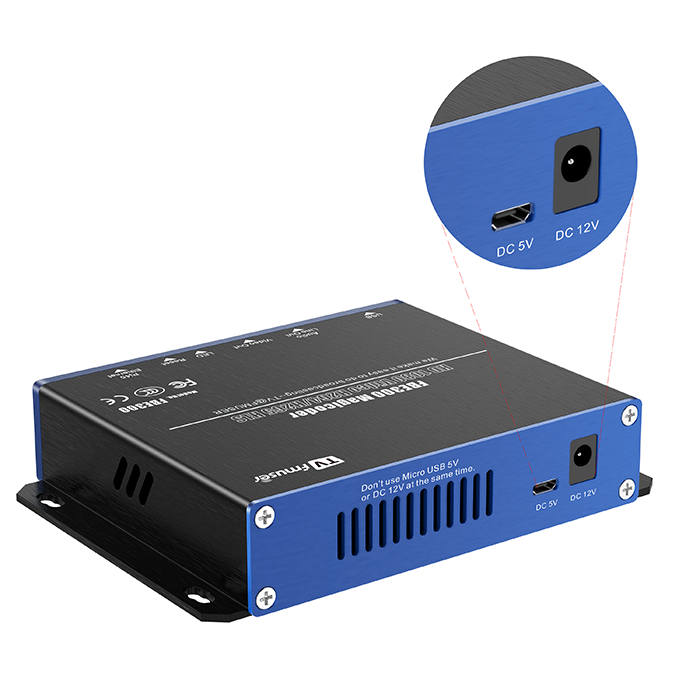 the FBE300 can convert IP video streams to other formats/protocols/resolutions and re-stream the converted IP video stream to the network. Widely used in TV operators, telecom operators, system integration, can greatly reduce the cost of system replacement.

the FBE300 can play video files from HD output in HD or on digital display ads.

The FBE300 can also be dual-stream mixed input for simultaneous display of large and small screens for distance education, telemedicine, program commentary, and more.

FBE300 can also be used for program recording and storage. It downloads and stores IP video streams and is widely used in program recording, monitoring and playback, and personal network video downloading. FBE300 is the only small device on the market that integrates encoding, transcoding, decoding, playing, storing, and mixing. Due to its compact size, economical price, and complete functions, FBE300 is very suitable for system integrators and individuals and provides a high-quality video streaming experience for all users.

Benefits You Can Not Resist

How to Use FBE300 IPTV Transcoder? 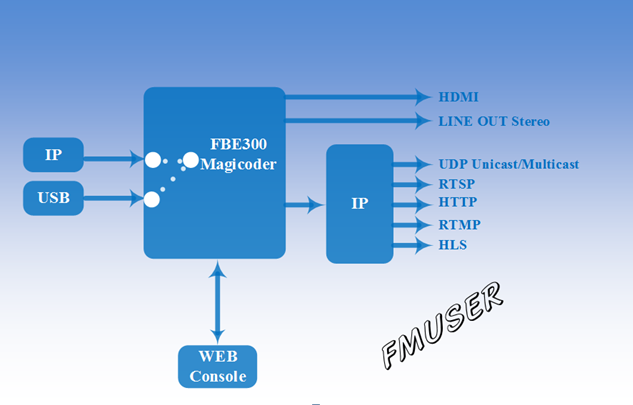 You May Also Use FBE300 IPTV Transcoder in:

By reducing video resolution, this solution can provide low-resolution video for slow Internet users. For example, FBE300 transcoder can convert 1080i@50fps video to 1080p@30fps, 720p@25fps, or 480p@25fps, and push it to a live platform or streaming server, so it can reduce bandwidth usage. This solution can improve the usage of broadband and improve device compatibility by converting the encoding format to the most popular formats like MPEG-4, H.264, H.265. For example, FBE300 converts MPEG2 format which commonly used in broadcast television set-top boxes to H.265 video and AAC audio (the most popular code) streams and streams them to live platform for streaming servers. By reducing video streams, this solution can provide low-stream video for slow Internet users. For example, the FBE300 transcoder can convert 8Mbps video to 2Mbps and stream it to the live platform or streaming server to reduce the bandwidth usage. 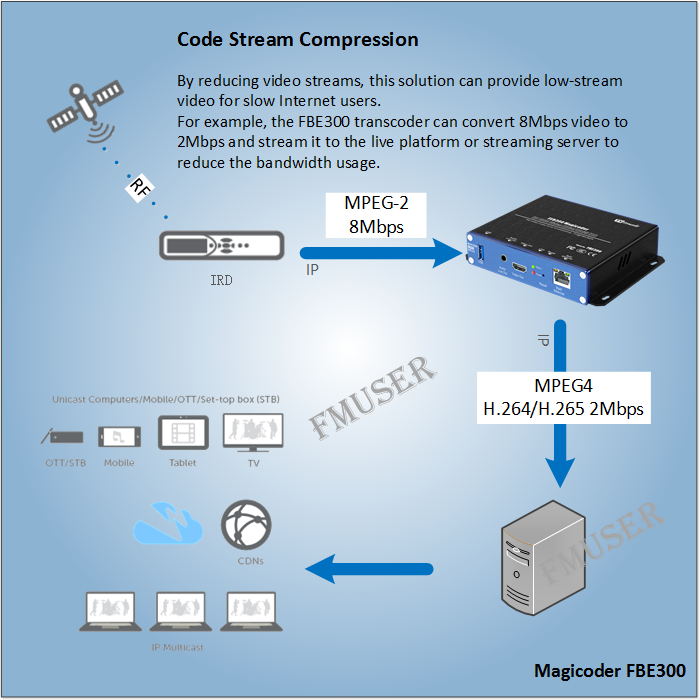 This solution can be applied to different scenarios. The FBE300 transcoder supports simultaneous output of RTMP, RTSP, HTTP-TS, and M3U8 streams. It can adapt to different streaming modes, such as live broadcast, on-demand, and broadcasting, etc. This solution is mostly used to meet the resolution requirements of different screens like TVs, notebooks, and mobile phones. The FBE300 transcoder can output HD, network streams, and these two streams support different resolutions for output. This can be viewed on different size screens to reduce the usage of bandwidth and reduce buffering so that to improve video viewing speed. This solution is used to push video files to the web platform. The FBE300 transcoder converts video files from a USB flash drive to an IP video stream, then transmits them to different locations via different protocols. This solution can be used for personal network video download, program recording, monitor playback, etc. The network stream video can be converted into a video file and stored in a USB flash drive for later program video replay or rebroadcast. This solution enables long-distance audio network transmission by using the FBE200 encoder and the FBE300 transcoder, which is commonly used for audio transmission between the studio room and the transmitter tower. The audio program source is streamed to the audio service via the FBE200 encoder and decoded by the FBE300 into a lossless audio output to the transmitter.